One step led to another. That is the message from Keira Bell, a 24-year-old British woman who lives daily with the regret of transitioning to male gender in her teens. She received puberty blockers after just a few appointments at a gender clinic, and later injected testosterone. By age 20, she had undergone a double mastectomy.

On Dec. 1, 2020, Bell won a lawsuit against the Gender Identity Development Service of the Tavistock and Portman National Health Service Foundation Trust. Bell claimed doctors should have challenged her more about the decision to transition before starting medical treatment. GIDS is the only institution that treats people under 18 with gender dysphoria as part of England’s national health service. 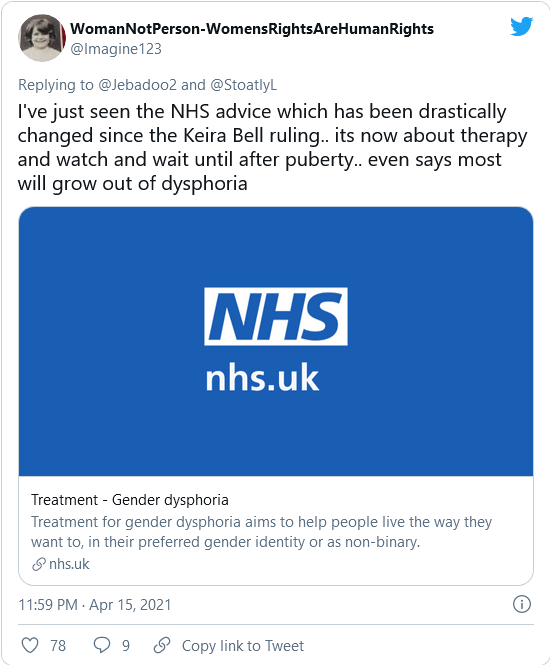 In short, the High Court ruled that people under age 16 with gender dysphoria — people whose sex at birth is contrary to the gender they identify with — cannot give informed consent for treatment with puberty blockers, drugs that aim to halt normal puberty.

The decision also encouraged docors to seek court approval before treating any gender dysphoric person under age 18 with 'affirmative' medical therapy (ie, puberty blockers and cross-sex hormones, such as testosterone, to transition to male or estrogen to transition to female) if there is any chance that the patient might not fully understand the long-term implications of therapy.

This 36-page High Court ruling has upended the affirmative medical treatment model for adolescents with gender dysphoria in the U.K. The decision is currently being appealed.

GIDS performed a study that showed no changes in quality of life, psychological function, or degree of gender dysphoria in 44 children who took puberty blockers for up to 3 years The study also showed adverse effects of the treatment: suppression of bone mineral density and growth. And almost 100% of kids taking these agents continued to transition, contradicting GIDS' claims that puberty blockers function as a 'pause' button to give children more time to consider their options. Rather, the findings suggest that the kids were effectively on a one-way path to transitioning medically.

The next step is taking cross-sex hormones, which are associated with several irreversible changes, including deepening of the voice, facial hair, clitoral growth in girls taking testosterone, and possible infertility and sexual dysfunction in both girls and boys. Long-term adverse effects include osteoporosis, blood clots, heart disease, and cancer, among others.

Many will then look to surgeries — as did Keira Bell — particularly the euphemistically termed 'top' surgery, which means a double mastectomy for a female transitioning to male, or breast augmentation for males transitioning to female. In the U.K., such surgeries are reserved for people over 18, but in the U.S., double mastectomies have been performed on children as young as 13 years old.

"I was an unhappy girl who needed help. Instead, I was treated like an experiment," says Bell, telling her story on the website Persuasion. "As I matured, I recognized that gender dysphoria was a symptom of my overall misery, not its cause. Five years after beginning my medical transition to becoming male, I began the process of de-transitioning. The consequences of what happened to me have been profound: possible infertility, loss of my breasts and inability to breastfeed, atrophied genitals, a permanently changed voice, facial hair."

Bell's victory in the U.K. High Court is considered a landmark decision, and along with moves in some other European countries, it signals that the tide may be starting to turn when it comes to how a minor with gender issues can be treated by the medical profession.

A New Kind of Patient

Will Malone, MD, is an assistant professor of endocrinology practicing in Twin Falls, ID, who says there is little evidence to support hormonal interventions for people under 18 with gender dysphoria. In 2020, Malone was one of several doctors and researchers who formed the Society for Evidence-Based Gender Medicine (SEGM), a not-for-profit organization that now has at least 100 physician members.

Malone told Medscape that he first became interested in this issue because he started receiving calls from primary care doctors who said they were seeing teenage girls who were identifying as male, often clustered in groups. "Some girls were very distressed. Some were asking for hormones, some not. The primary care docs wanted to know what to do."

This phenomenon, Malone says, was very different from any gender dysphoria he had learned about in medical school or training, which was primarily in mature adult males who wanted to change sex or was the classical childhood-onset gender dysphoria where young children (mainly boys) reported feeling trapped in the wrong body. 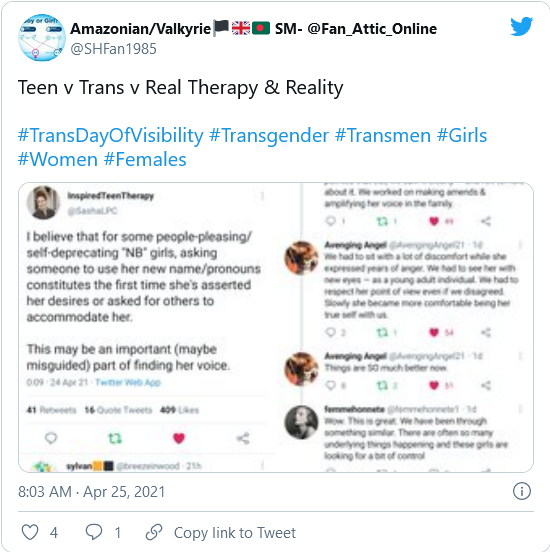 The vast majority of youth now presenting with gender dysphoriaare adolescents who suddenly express revulsion with their sex from birth, and 70% of them were born female. Many of them have anxiety, attention deficit hyperactivity disorder, autism spectrum traits, and depression, Malone explains, which need to be considered.

This newer diagnoses— which has been termed late-, adolescent-, or rapid-onset gender dysphoria — has now been seen in every gender clinic in the western world, and there has been a huge surge in the number of cases. One recent U.S. survey found a 4000% increase since 2006, and there have been similar large increases in Finland, Norway, the Netherlands, Canada, and Australia.

The London GIDS clinic has seen a 30-fold increase in referrals over the past decade – and again they were primarily adolescent girls who said they now identify as boys.. Malone says there is no credible scientific explanation for why there has been such a big swing from predominantly males to predominantly females experiencing gender dysphoria, and around the time of — or just after — puberty onset.

Sabine Hannema, MD, of the Department of Pediatric Endocrinology, Sophia Children's Hospital in Rotterdam, the Netherlands, treats transgender children. She told Medscape that the number of referrals has indeed increased in the last decade, and that the ratio of children she sees has changed, with relatively more trans-boys (assigned female at birth) in recent years.

Stephen Rosenthal, MD, a pediatric endocrinologist at University of California, San Francisco, also treats transgender youth. He said he believes the concept of late-onset is a parental notion. "From our experience in clinical practice, what seems like … rapid-onset from the perspective of the parents — because they are only just hearing about it — might not be [out] of the blue but something the child has lived with for some time — but only revealed during adolescence."

Nevertheless, he acknowledges that there's a lot more that needs to be known.

Is Social Contagion Playing a Role?

There have been numerous reports in the press of clusters of adolescent girls, often in schools, claiming they are now transgender. Many involved in the care of these children are increasingly concerned about the possible role of social contagion in the genesis and propagation of this phenomenon.

Hannema says she is aware of the concern that through exposure to certain media, some children might erroneously believe that their nonspecific emotional or bodily distress is a result of being transgender. In July 2020, reality star Khloe Kardashian appeared on the television show The View. During her segment, Kardashian, who has 255 million followers on Instagram, touted the benefit of migraine drug Nurtec ODT. She became a paid spokesperson for Biohaven...
General Health Myths about breast cancer risk are quite easy to come by. You might hear them in a casual conversation or read about them on social media. The disease affects many, which means many take interest in it. But the more something is talked about, the more...
Follow Us
Advertisement